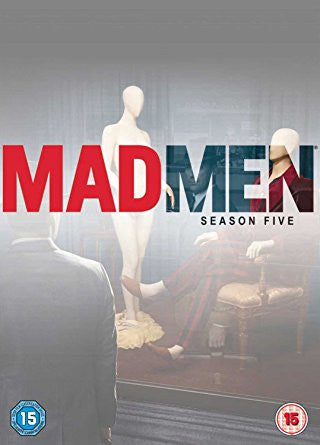 In Mad Men, the glass ceiling is dangerously low, and sexism reigns in a way that may shock modern viewers. But this isn't the prim '60s of The Dick Van Dyke Show; Weiner's characters seduce, smoke, and swig with abandon--often within the walls of Sterling Cooper. Includes all the episodes from series five of the show. Special Features¢ Mad Men Say the Darndest Things - Call it advice, truth, or politically incorrect, but the characters of Mad Men say the darndest things. Take a look at the best one-liners from the seasons and perhaps you will see your favourite! ¢ What Shall I Love if Not the Enigma? A glance into the life and artwork of metaphysical artist Giorgio de Chirico reveals the inspiration for the Mad Men Season Five poster. ¢ The Party of the Century - Author Deborah Davis and legendary bandleader Peter Duchin take you inside Truman Capote's infamous Black & White Masquerade Ball held at the Plaza Hotel on November 28, 1966. ¢ Scoring Mad Men: Inside a Session - Join composer David Carbonara, orchestrator Geoff Stradling and scoring mixer James T. Hill in the recording studio as they share their formula for scoring Mad Men.¢ The Uniform Time Act of 1966 - A pictorial time line explores the history of daylight saving time and its official observance in the United States. ¢ Newsweek Magazine Digital Gallery - A selection of Newsweek covers shares the top news stories from around the world in 1966. ¢ Commentaries - Gain behind-the-scenes fun facts and in-depth insight into the show from Matthew Weiner and the cast including: Jon Hamm, John Slattery, Elisabeth Moss, Vincent Kartheiser, Jared Harris, Christina Hendricks and more. Region: Region 2 Release Date: 5 Nov. 2012

All 15 episodes of the high-calibre US comedy series set in the offices of an American TV network. Liz Lemon (Tina Fey) is head script-writer for comedy sketch show 'the Girlie Show', who has to use all her political skills to keep her eccentric new star Tracy Jordan (Tracy Morgan) and arrogant, new-ideas boss Jack Donaghy (Alec Baldwin) in check, while she tries to keep the ship from sinking. Episodes comprise: 'Seinfeld Vision', 'Jack Gets In The Game', 'the Collection', 'Rosemary's Baby', 'Greenzo', 'Somebody to Love', 'Cougars',...

Drama starring Donald Sutherland as a schoolteacher who has been insulated all his life from the horrors of apartheid in his native South Africa. When the son of Ben's (Sutherland) black gardener is arrested and beaten as a result of a schoolboy protest in Soweto, at first he imagines the police must have had their reasons. However, the boy is picked up again, and this time he doesn't come back. Ben discovers that the boy was killed simply to gratify the violent urges of Captain Stolz (Jurgen Prochnow), a 'special branch' policeman....

A Song for the Season (DVD) Stockist

When Cal (Gerald McRaney) and his niece Fern (Alison Pill) move to Bethlehem, Kentucky, they are lacking Christmas spirit. Cal must tackle the depressing job of digging the school district out of a deep financial hole while Fern is angry about yet another move, this time to the home of her eccentric grandfather (Andy Griffith). But when they meet the lovely music teacher, Lily Waite (Naomi Judd), both Cal and Fern have a change of heart. Fern begins to take an interest in music again a passion of her late mother's and Cal takes...

All 13 episodes from the second season of the US crime drama starring David Duchovny as an LAPD detective. Set in 1967, the story follows Hollywood Detective Sam Hodiack (Duchovny) and narcotics officer Brian Shafe (Grey Damon) as they search for missing teenager Emma Karn (Emma Dumont), with their search leading them to encounter Charles Manson (Gethin Anthony) and his infamous family. The episodes are: 'Helter Skelter', 'Happiness Is a Warm Gun', 'Why Don't We Do It in the Road?', 'Revolution 1', 'Everybody's Got Something...

Six thrilling DVDs portraying 17 of the world’s most daring, death-defying air battles, viewed right from the pilot’s seat! The episodes include Kamikaze, The Luftwaffe’s Deadliest Mission, Jet vs. Jet, Thunderbolt, Gun Kills of Vietnam, Desert Aces, The First Dogfighters, No Room for Error and many others!

All the episodes from the first two seasons of the Golden Globe-winning anthology crime drama inspired by the 1996 film directed by the Coen brothers. In the first series, set a number of years after the events of the film, a trail of havoc is unleashed by malevolent hitman Lorne Malvo (Billy Bob Thornton) in the small town of Bemidji, Minnesota and beyond. During a chance meeting in a hospital waiting room, Malvo encourages down on his luck insurance salesman Lester Nygaard (Martin Freeman) to stand up against those who put...

From Alex Gansa and Howard Gordon, executive producers of 24, comes Homeland.Carrie Mathison (Claire Danes), a CIA Agent battling her own demons becomes convinced that the intelligence that led to the rescue of Sgt. Nicholas Brody (Damian Lewis), a US soldier who had been missing and presumed dead for eight years was a set-up, and may be connected to an al-Qaeda plot to be carried out on American soil. Already on thin ice with the CIA, and now assigned to a desk job after an incident in Iraq, Carrie is forced to break protocol...

All eight episodes from the third series of the TV comedy drama, centering on a mafia mobster's attempts to start a new life in Lillehammer, Norway. After testifying against his old buddies in the mob, New York gangster Frank 'the Fixer' Tagliano (Steven Van Zandt) enters the FBI witness protection programme, choosing to be relocated to Lillehammer, Norway (he liked the look of it when he saw the 1994 Winter Olympics on TV). Now Norwegian-American immigrant Giovanni Henriksen, he quickly sets about making his new life as comfortable...

Region: Region 2 (This DVD may not be viewable outside Europe. Read more about DVD formats.) Release Date: 04/10/2017

The irresistible and devastatingly addictive Netflix series comes to DVD and Blu-ray for the very first time, packed with exclusive extras fans of the show won t want to miss. Narcos, A Netflix Original Series produced by Gaumont Television, charts the rise of the infamous Colombian drug lord Pablo Escobar. Dubbed The King of Cocaine , Season 1 traces Escobar s rise to power between 1977 and 1992, a time in which he was responsible for smuggling 80 per cent of the cocaine supply into the United States, making himself a billionaire...

The Borgias return for more seduction, schemes, and outright villainy in all 10 riveting episodes from the second season. Academy Award® winner Jeremy Irons is back as Rodrigo Borgia, the power-hungry patriarch of the Borgia clan, who has schemed his way to the top of Roman society as Pope Alexander VI. But with absolute power comes even more powerful enemies who will stop at nothing to see him toppled. While the Pope schemes to destroy his foes, his mistress Giulia Farnese (Lotte Verbeek) realises her position in the bedroom...