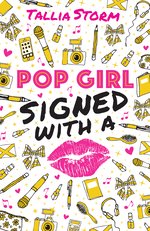 Teen pop goddess Tallia tells you what it’s like to be the face on the world’s billboards. Songstress, model, novelist: she’s been there and done it all! Storm Hall has always loved singing. That’s not changed. But everything else in her life has. Since she was pulled up on stage in Hawaii to sing with her musical superstar idol, her phone basically hasn’t stopped ringing. And from glossy magazines to Twitter gossip, her face pops up everywhere you look. Fancy cars, parties, record deals, impossibly dreamy pop star hotties. Storm is living the dream. But after fifteen minutes of fame, what comes next? Is this really the dream she wants? Tallia Storm’s second fabulous semi-autobiographical novel Based on Tallia’s real experiences, this book tells it like it is Tallia was discovered by Elton John at the age of just thirteen She is now signed to Virgin Records and writes for Shout! magazine

Pop sensation. Paul Frank model. Author. Is there anything Tallia can’t do? See behind the hair in this novel based on her lucky break.

Four years after he was presumed dead Derrick Storm - the man who made Richard Castle a bestseller - is back.

Christmas 1860. Polly already living in grinding poverty finds herself alone on the streets of Hull when her mother dies in childbirth. Rosalie brought up in affluence and comfort on the other side of town loses her own mother in similar circumstances and on the same day. Polly takes a job as scullery maid in Rosalie's lonely house and the two girls form an unlikely friendship. Travelling together to the North Yorkshire Moors they discover a new kind of life and find unexpected joy and fulfilment.

Break out the rainbows: love conquers all! The obstacle-crushing Tumblr true-love tale of Lucy and Kaelyn: stars of YouTube’s My Coming Out Story. Smile, blub, be inspired.

Celebrate the perfect couple with a gift as pure and beautiful as their love; faded lilac and cream roses stand proud in a Kilner jar vase. Simply add your joyful words to the commemorative label to create the perfect top table centrepiece.

How do you hold on to a love that is slowly slipping away from you? Can you let go of the past when you know what is in the future? And how do you cope when you know that every kiss is a countdown to goodbye? This is the story of a love affair of Ryan and Molly and how they fell in love and were torn apart. The first time Molly kissed Ryan she knew they'd be together forever. Six years and thousands of kisses later she's married to the man she loves. But today when Ryan kisses her Molly realises how many of them she wasted...

Just One Kiss both Stockist

Just One Kiss Nestled in the heart of Seattle is a warm hub of decadent baking delights and the owner, Angela Loukas, is about to meet a mouthwatering man – one she can’t resist! Unfortunately, Daniel Flynn is officially celibate. No sex. No dating. But once he steps into Angela’s shop, he remembers what temptation – in the form of chocolate icing and a mischievous set of chocolate brown eyes – feels like.

On a warm June evening a red double-decker bus full of passengers speeds down a London street. A few blocks away a man and a woman climb into a limousine reveling in a magical evening of dancing and champagne. As their driver pulls into an intersection the couple shares their first searching kiss. For a moment etched in time all stands still - until in a flash of metal and glass their limousine is struck at full speed crushed under the bus' tremendous weight. And a long journey begins - toward healing toward hope...

With tight breeches and loose morals the horse trials circuit is a hell-for-leather chase across the magnificent parkland of England's finest country estates. Flirtation is compulsory sport; love is a professional hazard. Silver-tongued charmer Rory Midwinter is quite at home in this hedge-jumping bed-hopping world of competitive weekend house parties. Having been born into the saddle and with a rock star owner as patron he has no intention of settling down. Only his long-term groom Faith has other ideas. Tash and Hugo Beauchamp...

In Kiss Kiss you will find eleven devious shocking stories from the master of the unpredictable Roald Dahl. What could go wrong when a wife pawns the mink coat that her lover gave her as a parting gift? What happens when a priceless piece of furniture is the subject of a deceitful bargain? Can a wronged woman take revenge on her dead husband? In these dark disturbing stories Roald Dahl explores the sinister side of human nature: the cunning sly selfish part of each of us that leads us into the territory of the unexpected...

His hands weren't quite so gentle now ...Amelia Ashton has made it. The singer-songwriter is one of the biggest recording stars of her time - but the success she has longed for has taken its toll and her life is no longer her own. When things get too much during her sell-out tour of the US Amelia heads back to London in search of some quality time. Meeting up with Karis her former girlfriend-in-crime Amelia is soon in the midst of some sensual adventures such as consummating a childhood crush at her friend's wedding. And...

One More Kiss both Stockist

Blaze March 2013 Since her divorce, cupcake queen Alysse Dresden prefers baking to boys...until a phone order from a sexy-voiced stranger melts her insides like butter. It isn't until Alysse makes the delivery that she realises - there's only been one man whose voice had such an effect: her mysterious, gorgeous ex-husband...

After The Kiss eBook Stockist

Paranormal August 2010 Belladonna Reynolds has just married a werewolf. Severo has given her nearly everything she could wantlove, amazing sex, and the honor of choosing her as his mate for life. Yet there is one thing she craves that Severo will not give her: his blood. To a vampire, a couple's great bond is formed with the bite. But Severo will be shunned by his own kind once marked by a vampire. Even as they enjoy intense passion in their marriage bed, Bella and Severo have to wonder: Can a marriage between a werewolf and...

Welcome to a dark new world where lethal beautiful archangels hold sway over immortals and mortals both with the Guild Hunters caught in between tasked with retrieving those vampires who break their contracts with their angelic masters. Elena Deveraux is a Guild Hunter. She was hired to do the impossible - to hunt down a rogue Archangel - and she suceeded where none had believed she could. But in the process she fell in love. And not just with anyone: with the Archangel Raphael. It a love that's as powerful entrancing and...