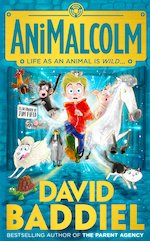 David Baddiel’s latest nutty treat – even better than The Parent Agency! Do your grumpy parents moan that you act like an animal? Pet-hating Malcolm knows what that’s like. He’s turning into one… Malcolm isn’t one of those kids who dreams of having a kitten or puppy. His house is FULL of critters, but he just wants a new laptop. So the school farm trip is hardly going to set his world on fire. But Malcolm is about to find out that LIKING animals is very different from BEING one. (Especially smelling like one.) David Baddiel is one of the UK’s top comedians His book The Parent Agency won a Lollies Award His other books include The Person Controller He has worked with Frank Skinner and Rob Newman #pbexclusives-0111 #8-11years-1212 #blockbuster-wbd #funnybooks-isbc-xd #reluctant-readers-17 #adventure-sc17 #lollies17-9to13

'...Startled by His Furry Shorts!' Stockists

Sound the Cosmic Horn! Bestselling author Louise Rennison's seventh book of the confessions of crazy but loveable teenager Georgia Nicolson is out in PB! Why did I admit I wanted Masimo to be my proper boyfriend? Why? * One minute he was snogging me and then the next he was snogging Wet Lindsay stick insect and drip. * Perhaps I should tell him he can go out with her as well as me...* But then I might snog him after she has snogged him which would mean I have practically snogged her!!! Erlack! * I would rather snog my cat Angus! * He has certainly got nicer legs...Well more of them anyway. Georgia is on the 'rack of luuurve'...

The unmissable new action-thriller from one of the biggest names in British fiction - the No 1 bestselling author of The Ghosts of Sleath Haunted The Magic Cottage and The Rats. As millions of readers around the world will testify James Herbert's ability to shock and enthral is matchless. Now in '48 he has surpassed his own remarkable achievements to create an electrifying new novel of pure heart-stopping action and invention that will take readers to new levels of terror and excitement. In 1945 Hitler unleashes the Blood Death on Britain as his final act of vengeance. Hoke an American pilot and one of a tiny minority...

'Turn off the television - in fact why don't you turn off all the lights except for the one over your favourite chair? - and we'll talk about vampires here in the dim. I think I can make you believe in them.' Stephen King from the Introduction. 'Salem's Lot is a small New England town with the usual quota of gossips drinkers weirdos and respectable folk. Of course there are tales of strange happenings - but not more than in any other town its size. Ben Mears a moderately successful writer returns to the Lot to write a novel based on his early years and to exorcise the terrors that have haunted him since childhood. The...

First published in 1889 and never out of print Jerome K Jerome's classic of humorous literature continues to delight new generations of readers. The book follows three friends Harris George and Jerome himself accompanied by the ever-mischievous (and actually fictitious) dog Montmorency as they skull up the Thames from Kingston in Surrey as far as Oxford. However the book is far more than a travelogue. It uses incidents from the journey as jumping off points for some virtuosic set pieces as hilarious and relevant today as they were in the late Victorian period when boating was becoming the next big thing". Stephen Lambe...

Frank McCourt continues his life story in the brilliant bestselling sequel to the million-selling 'Angela's Ashes'. 'Angela's Ashes' was a publishing phenomenon. Frank McCourt's critically-acclaimed lyrical memoir of his Limerick childhood won the Pulitzer Prize the National Book Critics' Circle Award the Royal Society of Literature Award and the Los Angeles Times Book Award amongst others and rapidly became a word-of-mouth bestseller topping all charts worldwide for over two years. It left readers and critics alike eager to hear more about Frank McCourt's incredible poignant life. Tis' is the story of Frank's American...

1 227 QI Facts To Blow Your Socks Off Stockists

QI" is the smartest comedy show on British television but few people know that we're also a major legal hit in Australia New Zealand Israel and Africa and an illegal one on BitTorrent. We also write books and newspaper columns; run a thriving website a Facebook page a Twitter feed; and produce an iPhone App and a sister Radio 4 programme. At the core of what we do is the astonishing fact - painstakingly researched and distilled to a brilliant and shocking clarity. In Einstein's words: 'Everything should be as simple as possible but not simpler.' Did you know that: cows moo in regional accents; the entire internet weighs...

Following the recent unveiling of the monument to Bomber Command in London's Green Park the publication of this lovingly crafted account of the exploits of oft overlooked 1 Group is set to be a timely one. Patrick Otter combines an appropriate level of detail regarding operations aircraft bases and incidents with accounts of human endurance and squadron fraternity which works to create a thoroughly well researched account of the wartime proceedings of 1 Group which is rooted firmly in humanity. The book is heavily illustrated throughout with both images of aircraft and pilot profiles supplementing the text perfectly and...

This book is suitable for ages 2 to 12 years. By presenting the popular 1-2-3 Magic parenting program from a child's point of view this innovative guide provides kids with a thorough understanding of the disciplinary system - from the counting and time-out methods parents will be using to how better behaviour benefits the entire family and leaves more time for play. Storytelling portions are coupled with copious illustrations to help describe the basic tenets of 1-2-3 Magic - such as positive reinforcement charting and the docking system - while a question-and-answer section outlines common situations including What if...

Ten gruesome Greek legends guaranteed to get you groaning – because they’re told the Horrible way! From munching monsters to Medusa’s hideous hair, these monstrous myths are the ultimate fright!