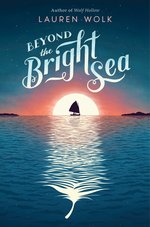 Bargain Beyond the Bright Sea Stockists

What is Home? The mainland Crow’s never seen? Or the family she’s never met, who cast her adrift as a baby? A castaway. An island. A 20st century Robinson Crusoe, to make you ask where YOU really belong. Many stories start with a castaway washed up on an island, dreaming of home. But Crow has no idea where ‘home’ really is. Set adrift in a boat when she was just a few hours old, she’s never left the starkly beautiful island where she was washed up. Raised by Osh, the painter who found her and saved her, Crow has always wondered about the world beyond. Who are her real family? Why do some of the islanders fear her? And what is that eerie fire across the water, calling out to her? By the Newbery Honor winning author of Wolf Hollow A deeply emotional tale of self-discovery and belonging Set on a remote Massachusetts island during the 1920s “Vivid and heart-wrenching” – Goodreads

This is the story of one of the most successful football clubs in history under one of the greatest football managers of our time. But it is also a book about what it has meant to be a Manchester United supporter during the remarkable 25-year reign of Sir Alex Ferguson. The book begins in the winter of 1986 - when Sir Alex found himself in charge of a demoralised club facing relegation - and describes the creation of his first great side including Schmeichel Bruce Pallister Keane Ince Giggs Hughes and Cantona. It goes on to introduce Fergie's Fledglings - the generation of David Beckham Nicky Butt Paul Scholes Gary...

Using the Internet for the Over 50s in Simple Steps Stockists

Modern February 2010 Melting the ice princess! Jase Moore is determined to shake Samantha Magnussen’s touch-me-not façade. Could this ice princess really be out to steal his sister’s new husband? This pirate tycoon will distract her – the only way he knows how! Why does this provocative stranger have such a low opinion of her? Jase’s angry contempt gets under Samantha’s protective shell. While his voice – dark, and full of unspoken sinful promise – storms her heart and offers temptation too hard to resist…

Author: Adam, Rhiannon Publisher: Thames & Hudson Ltd Published: 05/10/2017 Format: Book Type: Hardback Genre: Photography Dimensions: 230 x 177 mm Pages: 240 Polaroid: The Missing Manual is the go-to resource for all lovers of instant photography. Divided into two main parts, ‘Camera and Film Format Guide’ and ‘Creative Techniques’, it offers a comprehensive introduction to instant photography, including: • A wide-ranging overview of instant cameras and compatible accessories and film • Tips on what to buy and where to buy it • How to adapt equipment and preserve the life of your images •...

HOUSE OF SECRETS follows three siblings and their family as they are forced to move to a mysterious new house in San Francisco and end up embarking on a journey to retrieve a dark book of untold power. The first story in an epic fantasy adventure trilogy! When Brendan Cordelia and Nell move to Kristoff House they have no idea that they are about to unleash the dark magic locked within. For the house once belonged to a crazed writer whose stories have come to life. Literally. Now the Walker kids must battle against deadly pirates bloodthirsty warriors and a bone-crunching giant. If they fail they will never see their parents...

! A GIFT THAT KEEPS ON GIVING! Dusty Wilson was determined to get Deb to see his side of their business dispute... along with the attraction between them. All this city slicker needed was some time in wide open spaces... and the close confines of his bedroom where she could lose control once and for all... .