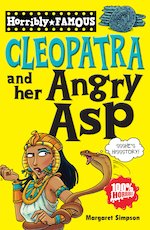 You’ve probably heard of Cleopatra. She’s dead famous for: having a fling with Julius Caesar and Mark Antony; getting carried away with her eyeliner, and having a nasty accident with an asp. But did you know that Cleo married both her brothers, was dead brainy and spoke nine languages, and had her little sister killed? Yes – even though she’s dead, Cleo’s still full of surprises!

From the home of Horrible Histories – a series where fame gets funny. It’s biography with a horrible twist!

You’ve probably heard of Al Capone. He is dead famous for: being handy with a machine gun, having one or two scars and hanging around with a rather nasty gang. But did you know that Al lived with his mum all his life, was a trend-setter in banana-coloured suits, and went bananas in Alcatraz prison?

A hilarious look at the life and times of Charles Dickens – with more than one twist in its tale! Discover the real story of the famous Victorian novelist who wrote Great Expectations, A Christmas Carol and Oliver Twist.

Even though he’s been dead for nearly 500 years, Leonardo Da Vinci is still full of surprises! He designed heaps of wicked weapons, wore lots of pink, and liked to cut up people’s dead bodies to look for their souls!

You’ve probably heard of a few inventors and their bright ideas… Alexander Graham Bell and his telephone George Stevenson and his Rocket (which was really a train) John Logie Baird and his television. But did you know that… Bell didn’t invent the phone, but he did make a weird machine out of hay and a human ear Stevenson didn’t invent the train, but he did spend a lot of time collecting gas in bladders Baird’s telly was useless, and so were his thermostatic socks? Yes, even though they’re dead, inventors are still full of surprises – and you can meet ten of history’s barmiest...

'Horribly Famous: Inventors and their Bright Ideas Deal' priced at £5.99  =>  Click for Deal

Horribly Famous: Joan of Arc and her Marching Orders Stockists

You’ve probably heard of Joan of Arc. She is dead famous for: leading the French army into battle, going up in smoke when she was burnt at the stake, and being an absolute saint. But have you heard that Joan survived a crossbow bolt through her chest, loved writing cheeky letters to very important people, and made the King of France look like a complete twit? Yes – even though she’s dead, Joan’s still full of surprises! Get the inside story in Joan’s secret diary, read the news that set France ablaze in The Gallic Globe... and find out exactly how a peasant girl of seventeen gave an entire army its marching orders.

'Horribly Famous: Joan of Arc and her Marching Orders Deal' priced at £5.99  =>  Click for Deal

You’ve probably heard of Oliver Cromwell. He is dead famous for: giving King Charles I the chop, clobbering Cavaliers with his Roundheads, and having some rather revolting warts. But did you know that Oliver cancelled Christmas and banned swearing, went to a party covered in poo – and was hanged and beheaded after he died? Yes – even though he’s dead, Oliver’s still full of surprises!

A book for all you scurvy sea-dogs out there! From flaming fire ships to dynamite-popping rum-guzzlers, discover the baddest buccaneers who ever sailed the bounding main!

'Horribly Famous: Pirates and their Caribbean Capers Deal' priced at £5.99  =>  Click for Deal

You’ve probably heard of Spartacus. He is dead famous for: being quite a good gladiator, giving the Romans the run-around, and looking an awful lot like Kirk Douglas. But did you know that Spartacus fought for the Romans as well as against them, camped his army of rebel slaves inside a volcano, and cut a deal with a bunch of double-crossing pirates? Yes – even though he’s dead, he’s still full of surprises! Read the inside story in Spartacus’s secret diary, catch up on all the latest battle results in The Daily Gladius, and find out how to keep the mighty Roman Empire at bay with just a few trusty followers and...

'Horribly Famous: Spartacus and his Glorious Gladiators Deal' priced at £5.99  =>  Click for Deal

Albert Einstein. The genius who invented e=mc2. Possibly the brainiest scientist in history – and the battiest! But did you know that Al’s life was almost as wild as his hair? Not only was an unruly young Al expelled from school, but he was spied on by the Nazis and the FBI. And after he died, he had his brain removed! Yes, even though he’s dead, Al’s still full of surprises!