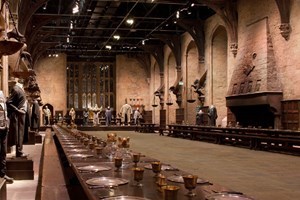 Step on to authentic sets, discover the magic behind spellbinding special effects and explore the behind-the-scenes secrets of the Harry Potter film series. Tread the original stone floor of the iconic Hogwarts Great Hall, encounter animatroniccreatures and wander down Diagon Alley. Located at the Studios where all 8 films were produced, the Studio Tour showcases the incredible British talent, imagination and artistry that went into making the impossible a reality on screen. Visitors will relive the magic through the eyes of the filmmakers who brought the Harry Potter film series to life.Your experience also includes lunch or dinner for two at a selection of central London restaurants.

Grab someone special and spend time relaxing, chatting and enjoying delicious food in an attractive gastropub of your choice with this incredible choice voucher. You'll be able to treat...

Experience the glamour and spectacle of London's West End with theatre tickets and dinner at a specially selected nearby London restaurant. A memorable day out to enjoy alone or share...

For a memorable day out in the capital, look no further than this Harrods cream tea and river cruise package. Head over to the world-famous department store in Knightsbridge for a mouth-watering...

London Stadium Tour for One

With a multimedia tour of London Stadium you can relive the buzz and excitement of the London 2012 Olympics. You’ll return to the glory of Super Saturday as you stand in the very...

This choice of 15 premium experiences and breaks for two is the perfect gift for that special someone or couple in your life. Whether they prefer spa, entertaining nights out, wining...

Explore the countryside that was home to your favourite Emmerdale episodes for years and discover more about the filming of the iconic television series with this epic bus tour of West...

For a day out in the Cambridgeshire countryside, visit Chilford Hall. Start your day with a classic afternoon tea, before being led by your expert guide around the vineyard, learning...