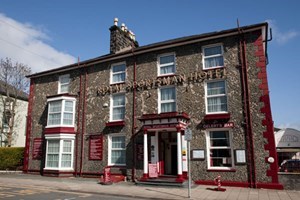 Recently awarded two AA Rosettes for its outstanding food, the Royal Sportsman Hotel is considered to be in the top five 3-star hotels in all of North Wales, and with good reason. This charming family-run hotel, originally built as a coaching inn in 1862, retains all the warmth and character inherent in its historic roots - your two night stay includes breakfast on both mornings, and gives you full access to all the beautiful sights and sounds of North Wales.

Escape to Lee Valley Campsite, Sewardstone and enjoy an unforgettable glamping break like no other! This gorgeous campsite is perfectly situated for discovering the best of both worlds – the 1,000 acre River Lee Country Park is on the doorstep, with its traffic-free cycling and walking trails, boating, rare wildlife and even white water rafting, and you can also be amongst the famous attractions in the heart of London in less than 40 minutes. You’ll spend the night in a comfortable cocoon which offers a modern alternative to the traditional camping experience.

Listed as the town’s highest graded hotel, the Hallmark Hotel Preston Leyland in Lancashire is a wonderful spot for you and a loved one to put your head down after a day of exploring this beautiful part of the country. You’ll both enjoy a one night stay in one of the venue’s quirky and stylish rooms, complete with a delicious breakfast in the morning, energising you for another day of discovery. There are so many nearby sites to visit, such as the Harris Museum just 6.3 miles away, and the 16th-century Hoghton Tower manor house just 7.9 miles. Or, if you fancy a little more activity, head to the 3.2 miles from Shaw Hill...

Fancy a refreshing change of scenery and a memorable break with plenty of things to do? Then this overnight escape for you and a loved one at the 4-star Peebles Hydro Hotel in Scotland is just for you! You won’t have to travel far to enjoy yourselves during your stay as the hotel is home to an indoor pool, spa, gym and first-class restaurant. If you’d like to venture outside of the hotel’s premises during your overnight stay then why not pay a visit to The Go Ape Adventure Park which is a short 10 minute drive from the hotel. A scrumptious full English breakfast for two is also included in the morning.

'Overnight Break with Breakfast at The Peebles Hydro Hotel for Two Deal' priced at £79.00  =>  Click for Deal

Enjoy a night of tranquillity and relaxation in attractive Blackburn with this two night break for two with breakfast each morning at the 4-star Mercure Blackburn Dunkenhalgh Hotel and Spa. This gorgeous retreat is a converted 700 year old country manor set amongst 17 acres of glorious parkland where you’ll discover a wonderful blend of historic character, original features, rural charm and modern comforts during your stay. With nearby attractions including the Trafford Centre, Chester Zoo and Blackpool Pleasure Beach you’ll find plenty to do.

Escape with a friend to Mercure Wolverhampton Hotel – a peaceful and comfortable haven standing in attractive gardens. Located in a delightful suburban setting, this beautiful retreat offers easy access to both the bustling Wolverhampton town centre and the stunning West Midlands countryside. Warm, welcoming and relaxing, your one night break will include use of the hotel’s health club facilities, as well as a delicious breakfast in the morning.

'One Night Break at Mercure Wolverhampton Hotel Deal' priced at £79.00  =>  Click for Deal

£99 Credit Towards 'Escape to France' Stockists

From soaking up France's stunning and luxurious coastline, to discovering the colourful countryside of France, there's a perfect holiday cottage waiting for you.With so many wonderful destinations to explore and secrets to uncover, France offers a whole host of delights. Discover the unique charm of the fantastic range of accommodation available, whether it’s for a family holiday or a romantic getaway for two. Gaze in awe at the rugged coastlines of Brittany, the medieval villages and spectacular scenery of the Dordogne, the inspiring craggy peaks and snow-capped mountains of the Alps or the cosmopolitan Cote d’Azur: all...

Escape to a historic city steeped in folklore and have your own legendary adventure with this break for two at Village Hotel Club Nottingham. This ancient city is home to fascinating attractions including Nottingham Castle and the oldest inn in England, all set alongside modern bars, restaurants, shops and markets to create a truly unique and buzzing atmosphere. Inside the hotel you’ll find cool and contemporary décor, chic and comfy rooms and state of the art health and leisure facilities – absolute perfection! Your overnight break for two will include breakfast in the morning.

One Night Break at the Two Brewers Hotel Stockists

You and a guest will enjoy a truly unforgettable night of relaxation with a hotel break at the Two Brewers. A tranquil 18th century haven boasting rural charm and stunning views over the village’s 115 acre common, you’ll be delighted with this elegantly furnished getaway. Whether you’re taking time out by the open fire or exploring the local area, you’ll love this overnight stay for two - complete with breakfast in the morning.

Built in the 16th century, Littlecote House is set within 40 acres of beautifully landscaped grounds. Once popular with historical figures such as Henry VIII, this superb country house makes a picturesque destination for today’s guests. Experience an indulgent midweek break at this Grade-I listed hotel, complete with access to the fantastic range of indoor and outdoor activities. You will stay in a standard room and feast on a delicious continental or Full English breakfast each morning.