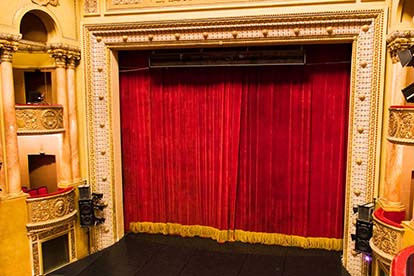 Discover a fascinating behind the scenes glimpse of one of London’s oldest, largest and most magnificent theatres with this backstage tour of the Theatre Royal, Drury Lane.Steeped in more than 350 years of theatrical history and having opened its doors in 1663, Drury Lane is the oldest theatre site in London which is still in use. No other theatre in Britain has a longer history of continuous use. Productions at the theatre fill the house regularly, with hits like Oklahoma, My Fair Lady, Oliver, 42nd Street and Miss Saigon. However, Drury Lane has witnessed almost as much drama off the stage as it has on it - having triumphed over tragedy, fire, bankruptcy and even murder, the theatre also see an assassination attempt against King George III, one evening mid-performance in 1800. The tour lasts approximately one hour, in which time you will be introduced to a wide-range of characters from various eras - professional actors will bring the theatre’s most famous and colourful stage-names to life, such as the great clown Grimaldi and the celebrated actress Nell Gwynne. Explore the theatre’s royal retiring rooms, front of house, backstage area and the rarely seen, innovative hydraulic under-stage machinery. To complete the experience, a delicious two-course meal will be served from a set-menu at a nearby restaurant - choices include: Planet Hollywood, Prezzo, Fire and Stone and Spaghetti House. Restaurant sittings are usually at 13:00 and 18:00 - please confirm meal times when booking.