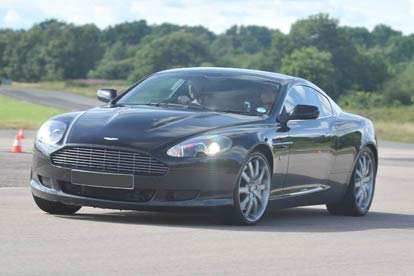 This Best of British Supercar Driving Experience comprises the legendary Aston Martin DBS and the brand new Jaguar F-Type ‘R’!Kicking off with the first Best of British Supercar - Aston Martin’s flagship DBS. This supercar shot to fame in 2009 with Daniel Craig behind the wheel in the James Bond spectacular ‘Casino Royale’. With a huge 6.0 litre V12 it just lacks a couple of machine guns in the front grill! Tipping the scales at 2 tons and with a near 200mph top speed coupled with a fabulous exhaust note it’s a thrilling drive that will leave the lucky driver with a permanent grin. For an Aston Martin fan it really doesn’t get much better than this!And if that wasn’t enough next in line from the Best of British stable is the brand new Jaguar 5.0 litre Supercharged F-Type ‘R’. With a 186mph top speed and a 0-60mph in just 4 seconds dead it’s a worthy adversary to Aston’s DBS. Tremendously powerful with its supercharged V8 engine under the bonnet it also sports a paddle-shift ‘F1’ type transmission - or for the less brave it’s just as happy being driven in full automatic mode. Your day will start with a welcome introduction and registration, once this is complete you will be given a demonstration lap by one of the driving instructors. You will then have the chance to get behind the wheel of the Jaguar F-Type R for 6 miles and when you thought it couldn’t get any better you will then have the chance to drive the Aston Martin DBS for a further 6 miles. Just as you are about to take a breath, you will then have a high speed passenger lap in a performance saloon, driven by one of the driving instructors.Finally you'll be presented with a certificate of supercar driving as a memento of what will be an unforgettable day!