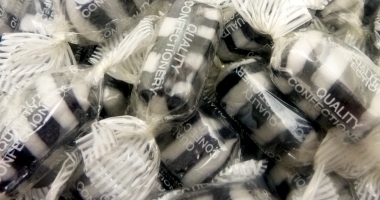 Everton Mints - Such a traditional British sweet! Now, the question is, why are they called Everton Mints? Are you sitting comfortably? Then we`ll begin... the sweets were made by Mother Noblett`s Toffee Shop in the Liverpool district of Everton. The black and white mints (reflecting the old Everton strip) were made to be distributed among the fans at matches, and they were jolly popular, just as they are today! So, there you go! A nice bit of trivia courtesy of the anoraks at A Quarter Of! - Qty In Order: 250g (8.8oz)