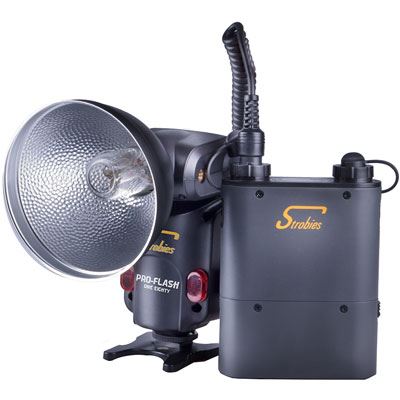 Interfit's ProFlash One Eighty Kit is a portable lighting solution for any photographer looking for an effective, radio-trigger compatible, rugged on- or off-camera flashgun and battery pack with plenty of power and plenty of juice. This bare bulb flash is capable of 900 full-power 180W/s flashes between charges and high-speed sync, which allows photographers to use the ProFlash One Eighty with the optional Radio Trigger Set (STR203) at shutter speeds up to 1/8000 second. The standard reflector features a silver reflective surface which redirects the light towards a given subject or scene, while the detachable diffuser creates a softer and more even spread of light. The ProFlash One Eighty kit contains the ProFlash, battery pack, charger, flash tube, standard reflector, cable, mini stand, diffuser, shoulder strap and pouch.

The mid-size Interfit 120cm (48 inch) Parabolic Softbox with Grid creates a unique quality of light that is ideal for portrait, fashion, and beauty photographers. It features an inner 1-stop diffuser with a 2-stop center diffuser to eliminate the hotspot that is common with parabolic softboxes. The high-contrast silver lining ensures maximum light efficiency and even edge-to-edge light.

Interfit's Stellar X Tungsten heads have been built to full professional specifications with tough aluminium bodies designed to withstand the rigours of daily use. The head operates silently and Stellar 500 Watt lamps are colour balanced to 3200k. Please note: The use of honeycomb grids, colour gels and snoots is not recommended as these will shorten the life expectancies of the lamps. PLEASE NOTE: Modelling lamp not included.

Constructed from enhanced fabrics that allow it to be used on both strobes and tungsten hot-lights, the versatile Interfit 30 x 180cm Strip Softbox with Grid is ideal for use as a hair or rim light on a stand or overhead. It features a pebbled silver interior for an even spread of light, and UV-coated inner/outer diffusers that allow users to adjust the softness of the beam. ***Speed Ring required. Sold separately***

This Interfit Strobies 60cm Folding Softbox is a quick, easy and portable way to get soft studio lighting effects from your flashgun. It's ideal for wedding and event or outdoor photographers. Simply fit your flashgun into the kit's shoe and you're good to go! The kit is supplied with a ball bracket which allows the softbox to be tilted in various directions, and a bag to store the kit in and keep it dust-free. The box fits directly onto a standard light stand (not included) or can be used with the Strobies Boom Arm for overhead lighting and combined with a reflector to create beautiful quality portraits. Also available in...

Specifically made for use with the RF4999 and RF5000 40cm beauty dishes, the Interfit INT311 honeycomb creates a tighter, more controlled area of light.

This portable light boom will revolutionise the way you use your ProFlash One Eighty lighting head, allowing you to place the head at high angles (without arm-ache!) or in places where it would otherwise be difficult to position the light, and to comfortably hold the head at low angles. Made of lightweight aluminium with a comfortable rubber grip, the boom extends from 50cm up to 1.2m

The Interfit Dynamic Ti Trigger is designed to operate with the Interfit EX Ti heads, bringing lighting control to your camera and allowing you to tune and manage up to 7 heads from up to 12m away.

The Interfit Strobies Umbrella Holder with Shoe Adapter is a versatile bracket that will fit on any standard light stand. The bracket tilts and swivels, making aiming the light quick and easy. Also included is a removable cold shoe mount that will accept a shoe-mounted speedlight (Sony/Minolta requires STR114 adapter).

The Interfit Strobies XL2 Bracket Kit is designed for the photographer preferring to use TTL metering off-camera. The rotating shoe mount enables the TTL ports to face the cameras position enhancing the signal range. An additional shoe allows radio transmitters/receivers to be fitted and the whole unit is tiltable via the use of a built in handle. A selection of optional accessories, such as a softbox, beauty dish or snoot, can then be added.