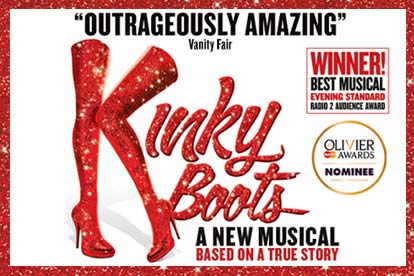 Experience the magic of London’s famous West End with this fantastic experience which includes a tasty meal for two and a pair of top price theatre tickets to see the smash hit musical, Kinky Boots.Based on the indie film of the same name, Kinky Boots follows young Brit Charlie Price, who abandons his family’s shoe factory to live with his demanding girlfriend in London. After the unexpected death of his father, Charlie returns to the struggling factory and looks to figure out a way to keep the business alive. Enter Lola, a fabulous drag queen, who gives Charlie the idea to create ladies’ shoes for men. Soon, the factory is turning out “kinky boots” under the supervision of Charlie and Lola, but can their crazy scheme actually work? The evening begins with a delicious two-course pre-theatre meal, after dinner, it’s time to move on to the theatre and settle in before the night’s thrilling entertainment begins, watching one of the most ecstatic musical shows in London right now. These are some of the hottest tickets in town, ensuring a fabulous night out to remember. You will enjoy your delicious two-course meal from a set menu at a nearby restaurant, which have been especially chosen to be within easy walking distance to the theatre, it will usually be at either Strand Carvery, Sophie's Steakhouse or similar.