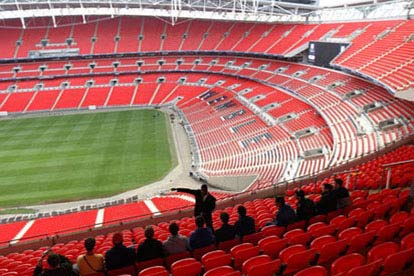 Bargain Tour of Wembley Stadium for One Adult & One Child Stockists

The home of English football and the FA Cup Final since 1923, the new Wembley Stadium opened in Spring 2007 and quickly re-established itself as the country's leading venue for sports and entertainment events. With state of the art facilities, spacious concourses, stunning acoustics and immaculate views from all of it’s 90,000 seats, Wembley is the UK’s ultimate stadium experience. A tour of Wembley makes a great gift idea and is the perfect way to inspire the next generation of sports fans with a behind the scenes look at how the largest stadium in the UK operates, as well as a chance to learn about the history of the venue. To begin you will be greeted by your guide who, over the duration of the tour, will share with you their extensive knowledge about the history of the original and new Wembley Stadium; this is your ideal opportunity to ask all those questions you've been dying to find out the answers to during any part of the tour. Your unforgettable visit lets you sit in the England manager's chair in the Press Conference Room, sense the excitement in the England Dressing Room, experience the tension of the Player's Tunnel, climb the 107 trophy winners' steps to the Royal Box and have your photograph taken with the replica FA Cup. As you are shown around the stadium, you will have the chance to take photographs of such historical treasures as the 1966 World Cup crossbar, the Jules Rimet Trophy commemorating England's World Cup glory, the torch that started London's 1948 Olympic Games and so much more.This voucher entitles one adult and one child to the tour.